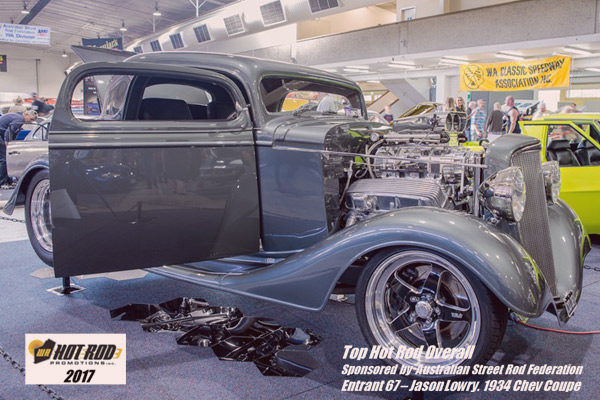 While there are dozens of awards handed out each year at the show for the various classes of cars; Street Machine, Hot Rod, Competition. Body styles; Coupe, Roadster, Sedan and individual areas of the vehicle; Engine Bay, Interior, Undercarriage, Paint, there is an Overall award given out to the highest point scoring vehicle in each class. For an Overall award to be considered there must be a minimum of 10 cars entered to be judged of that type, so that is why some years there won’t be a Top Bike or Top Competition award.

This year the show awarded Top Hot Rod Overall and Top Street Machine Overall to Jason Lowry’s ’34 Chev coupe and Greg Freeman’s ’69 Camaro respectively. These cars both cleaned up in the minor awards and were very deserving winners, as not only did they judge well, they also looked stunning and were both beautifully displayed.

The other big award, and arguably the most coveted, is People’s Choice. This award is decided by the viewing public and has nothing to do with judging or the show promoters, it is simply a popular vote. Quite often it won’t go to the wildest show car or the most highly detailed one, instead, it usually goes to a car that has a lot of impact but people could see themselves driving home in. This year was a very tight run race with just three votes separating the top two cars, but in the end it was Eddie Ierace’s stunning ’57 Buick coupe that took home the trophy.